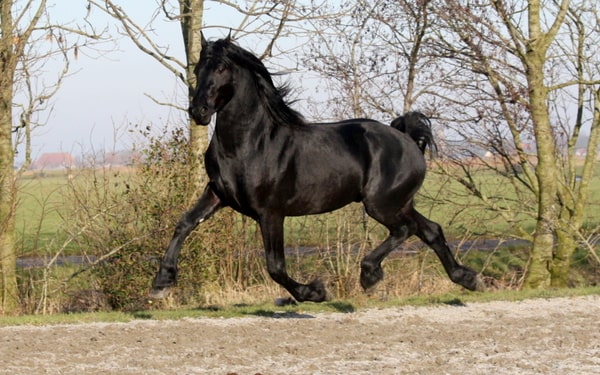 A Friesian was a warhorse that was good because of its easy trot and spirit. It is not too hot or too cold. This means that the Friesian more of a warmblood than draft (or coldblood) breed of horse. Like the Andalusian horses, they kept an “medieval warhorse” style. This is why they are an important Baroque type breeds of horses.

The 18th century and the 19th long after the medieval period the breed gained popularity for harness horses partially because of its striking appearance.

The first society that dealt with Friesian horses was established in 1879. This studbook organization (Fries Rundvee Stamboek FRS) was born the first Studbook that was published in the year 1880 (Paardenstamboek).

The breed had its own issues: cross-breeding with horses in the region resulted in an encroaching shortage of purebred Friesians. The situation was so dire that by the beginning of the 20th century there were just three breeding stallions remaining.

The reason for this cross-breeding is the popularity of different breeds like those of Ostfriesen or Alt-Oldenburger. It was also because the FRS had also registered horses of the breed, which aggravated things. The society eventually (renamed Friesch Paarden Stamboek -FPS FPS in the year 1906) unification of the registry, but the society would become exclusively for the Friesian horse breed in 1943.

Mechanization rendered the Friesian less useful for farms. However, unlike other breeds, World War II gave the necessary time for its Friesian horse’s population growth once more.